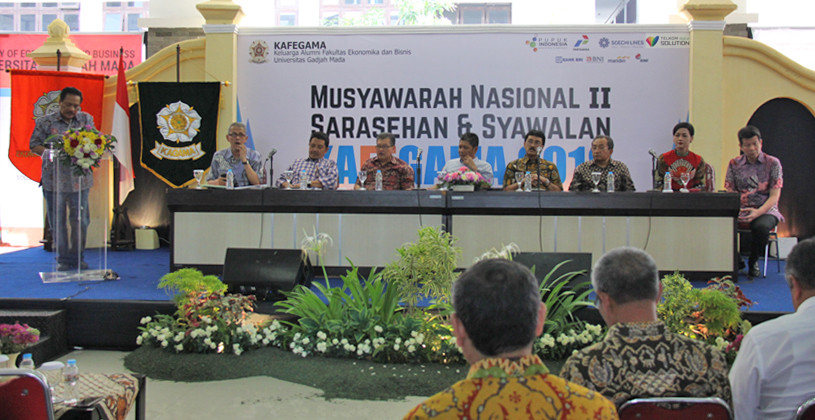 Alumni Family of Faculty of Economics and Business Universitas Gadjah Mada (KAFEGAMA) conducted the 2nd National Conference (Munas) on Saturday, July 7th, 2018. The national conference was held on the lobby learning center building of FEB UGM and it was attended by hundreds of alumni from various years and study programs. The purpose of the conference was also to maintain rapport between alumni, Munas II was carried to elect KAFEGAMA committee members for the period 2018-2022.

The event started at 9 am and opened by welcoming speech from Prof. Dr. Eduardus Tandelilin, as the head of Munas II KAFEGAMA. After that, the second speech was delivered by the Dean of FEB UGM, Dr. Eko Suwardi. He thanked all alumni who were willing to take their time to be present at FEB UGM.

After the accountability report presentation, the selected KAFEGAMA committees for 2018-2022 period was officially announced. Based on the results of the meeting, Perry Warjiyo, who also serves as the Governor of Bank Indonesia for period 2018-2023, was elected as Chairman of KAFEGAMA period 2018-2022, replacing Sapto Amal Damandari. In addition, Frederica Widyasari Dewi was elected as General Secretary and Bob T. Ananta as the new General Treasurer of KAFEGAMA.