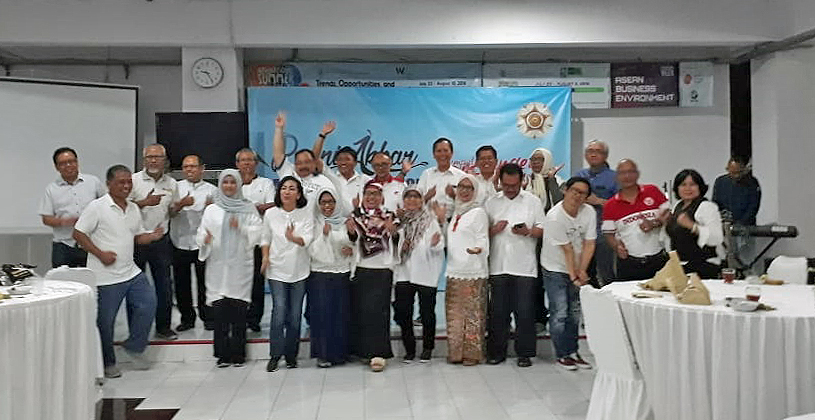 On Saturday, 8 August 2018 at 12.00 WIB in the Hallway of Faculty of Economics and Business (FEB) UGM, there was noise that was not from students, not as usual. This time came from a different source. The faces, which showed that they had gone through various phases of life, were sitting at several round tables and listening to the Master of Ceremony. Old songs from the keyboard played softly and the participants were asked to mention the title and singer of them. Apparently, Alumni Grand Reunion FE UGM Class of 81 event was underwaying.

The event among former university students turned out to happen again after 37 years. Aful Basri who became Chairman of the Grand Reunion Committee initially took the initiative with other friends because he saw the interest of alumni to meet very high. A small meeting was held to discuss the time, location, and event. As a result, the reunion began on Friday (17/8) night with activities which were having a dinner together and had a casual chat at Malioboro. Campus tour also enlivened the event in the next day. Walking from Gadjah Mada University Club (UC) UGM Hotel to Balairung UGM reminded alumni of their journey as students many years ago. “Earlier we also went to the new Learning Center Building of FEB UGM and all of us was amazed because now FEB was so much more advanced. We were very moved and proud, especially the AACSB international accreditation which has been successfully achieved by the faculty, “said Ridwan Nurazi who is now the Rector of the Universitas Bengkulu.

After touring, the next agenda was directly taken by lecturers who had ever taught alumni. Some of them were Arief Suadi, Abdul Halim, Basu Swasta, Suad Husnan, L. Suparwoto, Ibnu Subiyanto, Andreas Budi, Hardo Basuki and Zaki Baridwan. They testified when teaching students in class of 81. The laughter frequently accompanied the story of the teachers. Then, the event was continued with lunch and entertainment. On the sidelines of the entertainment, all alumni danced Gemu Famire at Plaza FEB UGM. That night, the art performance and exchange-gift were held which marked the culmination of reunion.

The purpose of holding Alumni Grand Reunion FEB UGM Class of 1981 was to remind that each alumni has owned their respectively professions, but before they were fellow students in this campus. “Therefore, I hope our relationship is closely tied to an unlimited time according to our theme, ‘Kekancan Sak Lawase’. In addition, hopefully FEB continues to be better and its students are able to bring UGM’s good name to the international world “said Aful Basri.