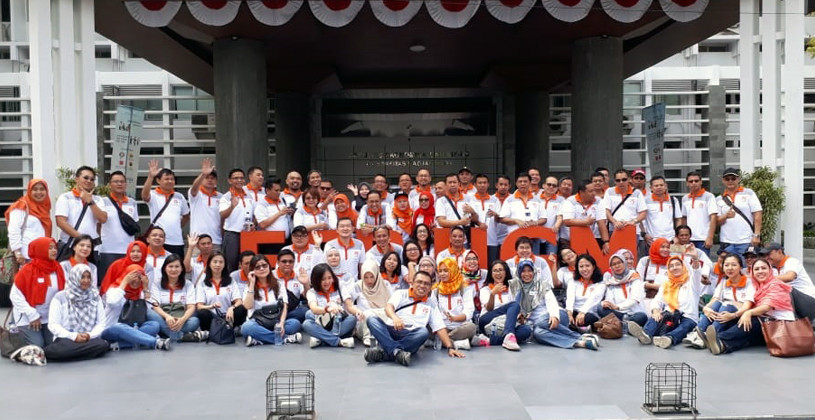 On Saturday, 1st September 2018 at 19.00 WIB, there is an unfamiliar voice at Plaza FEB UGM, a small talk of KAFEGAMA 1993 (Universitas Gadjah Mada Faculty of Economics Almuni Community). Those who had not meet for 25 years, sharing a smiles and stories under the sky of Yogyakarta. An Angkringan cart, with nasi kucing and ginger milk, were served to accompany their chitchat. The event was also enliven by a singer with a band.

The reunion was initiated by Kafegama 1993, they needed 25 years to realize it. The chairman of reunion committee is Fadjar Dwi Wisnhuwardhani. The reunion had the purpose of keep stay in touch between class of 1993, to be a place to share their experiences from the period of after their graduation until present time and also as a mood booster for them whose have busy life in their workplace. “Also we want to share about our careers experience to FEB UGM. We want to have better relationship with FEB UGM”, said Fadjar.

The reunion began with Sharing Session with FEB’s students on Friday, 31 August 2018 at 3.30 WIB, in 3 locations at Auditorium Djarum Hall (Management student), Audiovisual room (Accounting student) and Kertanegara room (Economics student). All students, gladly, have a great enthusiasm for this sharing session. And the next agenda is Napak Tilas or touring campus, on Saturday, 1 Setpember at 07.00 WIB, this tour was start from Bunderan Boulevard UGM, to Graha Sabha Pramana UGM, and for the last they visited Balairung UGM. As the peak of this reunion agenda, they held dinner and casual talk at Plaza FEB UGM, as mentioned above.

The last agenda of the reunion was having dinner and quality time between alumni by singing together, one of hits song titled Isabella was sang by alumni that night. Opening ceremony was started with one of alumni did a prayer and continued by speech delivery from the Chairman of Reunion Committee, Fadjar Dwi Wisnhuwardhani and Dean of FEB UGM, Eko Suwardi, Ph.D. After the opening, it’s time for one of core agenda which is scholarship announcement for six FEB UGM students. Then, they played a flashback video and showed photos of Kafegama 1993, the laughter frequently accompanied them. Finally, the reunion night was closed with they sang a hit song, Kenangan.